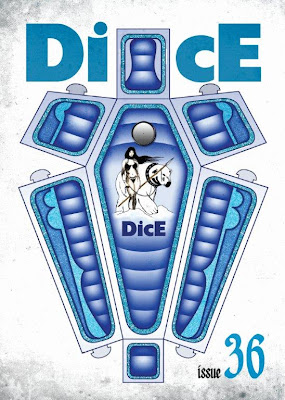 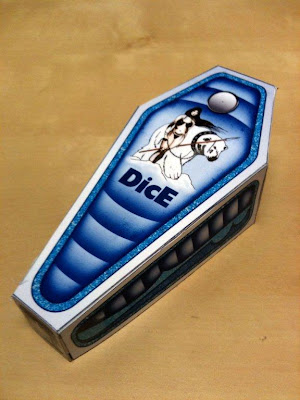 In a bowl put 2 teaspoons of Cagney & Lacey.
Add ½ cup of Different Strokes.
Finely chop some Bosom Buddies and lob that in.
Mix it all together with a Knots Landing.
Fry at medium heat in a pan for 15 minutes with a pinch of Alf.
Wammo!
Issue 36 bitches!!!!

Big up to our homeboy Alan Stedman for the wicked cut out cover! Also inside DicE 36 is the second issue of everyones favourite Tattoo mag...7 MAG! 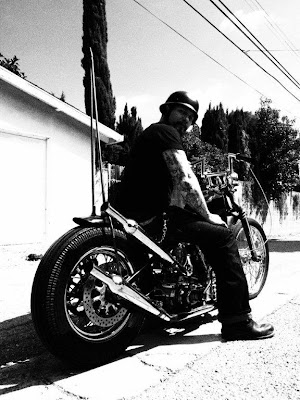 I was watching ‘The Hills’ the other day and I couldn’t help but notice the amount of deep conversation they all have about really important things. Oh My God, Shut Up! Stans Panhead is excellent. 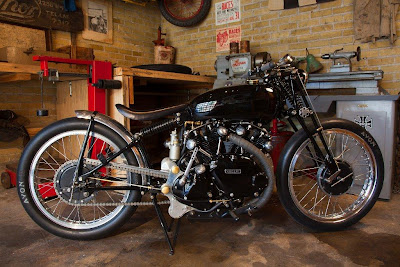 Jeff Decker took Yokohama by storm last month when he debuted his new Vincent, it was a smash hit! He also did an interview online recently for Bike Exif and some people replied that he is a… 'Huge elitist douchebag', 'not so clever' and a 'self indulgent tosser.' When I asked him what he thought about that he replied… “I have some serious conspiracy theorizing haters but I actually love them more than the ass kissers!”
Pic: Mark Shubin. 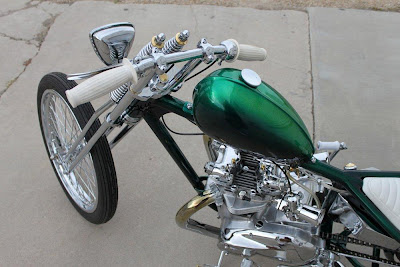 Jimmy: Prepare to die.
Dalton: You are such an asshole.
Jimmy: Damn, boy. I thought you were good.
Dalton: Go fuck yourself.
Roadhouse. 1989.
Pics: Mike Watanabe & Jeff Barker. 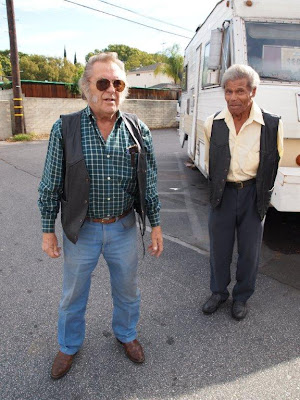 Bernie Montana and Hal Holiday are the epitome of living the American Dream. You have to see it and read it to believe it. 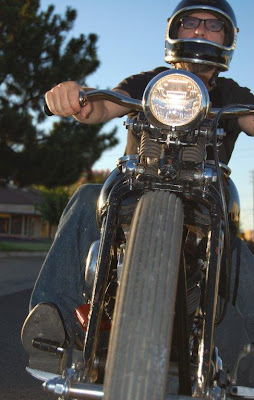 1 word, 4 syllables. Sacramento. The only place I have been where I nearly got shot off my motorcycle by a tweaker in a car. I was actually with Scotty Scott at the time too, although he wasn’t on this motorcycle here, he was on the Weiner Spleener.
Good times.
Pic: Becky Meyers. 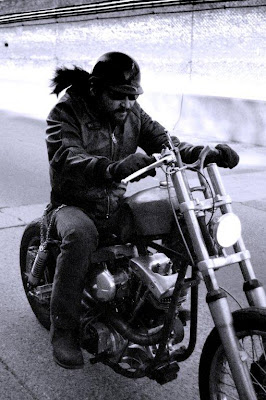 Part 4 in a series of 7 articles we are running on ‘The White Knights In The House Of Kolor’. This issue: Keino and his personal Shovelhead.
Pic: Ciero DeGuzman. 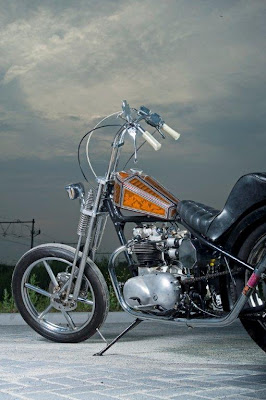 Here is a step by step guide on what to do when a cute bird gives you the eyeball from across the pub.
Step 1: Look to the right, then look to the left, then look at her and point with your hand in a gun shape and bring the hammer (your thumb) down and mouth the words, ‘Boom your dead with my sexiness’.
Step 2: When she comes over and asks what you are staring at, kill her mind with something like “I saw you staring at my penis and my penis asked my permission if we could both take you home, Owww!”
Step 3: before she can answer drop and do 5 pushups. Women love dudes who work out.
Step 4: Jump up and start doing wild Judo moves and then mix it up with jogging on the spot.
Step 5: If all that fails shout something even more clever as she walks away like, “I’m a world famous pin striper and I build Rat Rods, google that shit, you will be sorry!”.
Pic: Floris. 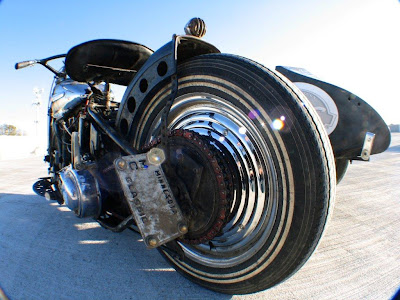 Teach does it again and builds this excellent Knucklehead with sidecar and he goes and rides it like a nutter! What's that thing called when you pull the sidecar up while riding it? A wheelie? A threelie? Whatever, he did one of those. 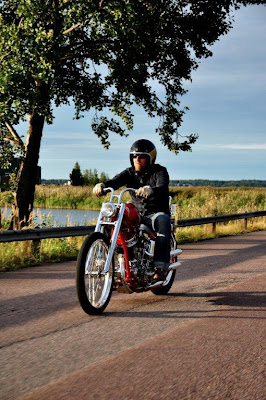 I just punched the annoying guy at Starbucks that wears all those stupid badges. Roadhouse.
Pic: Robin Hansson. 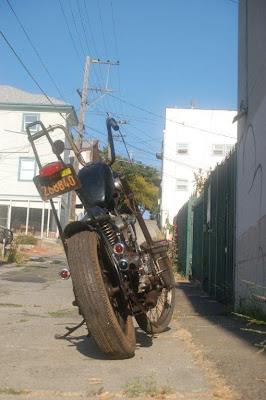 The find of the century! A Nor.Cal Knuckle Chopper that has great history and is un-changed since the '60s! Gimme a break!
Pic: Hollywood Hank. 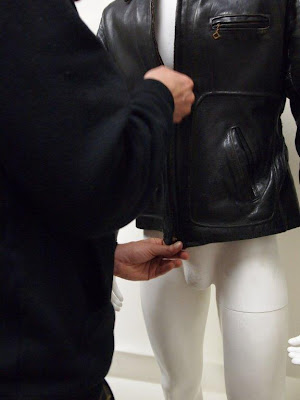 Road Worn & Weary. A new feature where I molest plastic male costume figures. Ok that actually makes me feel weird to say it out loud. 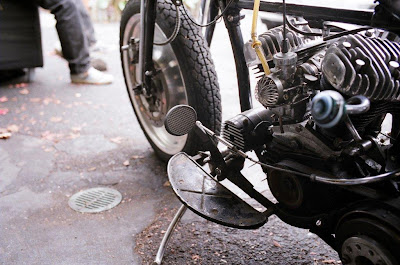 Adam Wright blesses us with his brilliance. And his photos. Just kidding Adam ...that's what I meant at the beginning for reals and then I turned it around as a joke and then I got all worried and shit that you wouldn't get the joke. Thus the explanation.
Pic: Adam Wright. 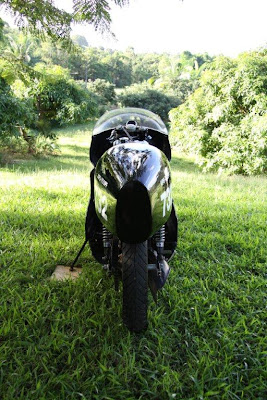 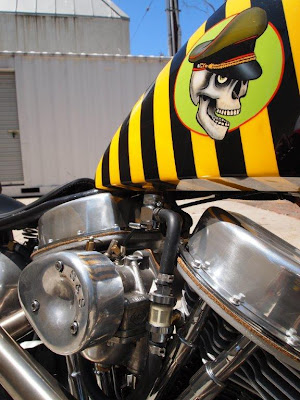 Who said playing proffessional poker leads to a life of misery? Not in this case! It leads to good looks, nice shoes and a Panhead Chopper.
Cherass Clart! 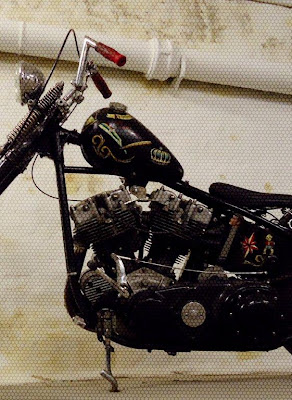 Nicke fishes the Ocean of purity with the net of life and brings us more goodness.
Pic: Nicke Svensson. 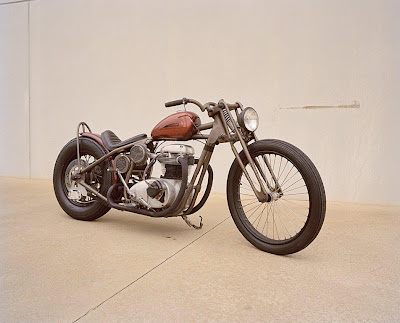 I was told that BSA stands for 'Bloody Sore Arse' years ago by an old English gimmer at the Carshalton Rock n Roll club one night. When I retaliated with..."oh yeah well Triumph stands for ...'True Romance Is Utterly Magical Piss Hips'..." he had already gone and all the lights were off in the club and I was the only one left because it took me so long to come up with what Triumph stands for.
Pic: Nick Umek. 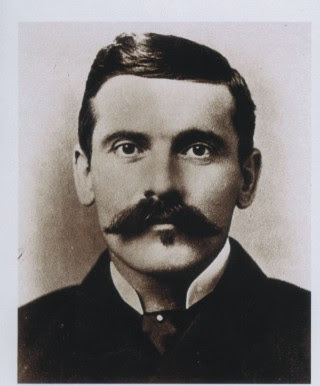 Dr. Glory please can you pay us what you owe us you fucking toss pot?
Posted by DicE Magazine at 9:00 AM