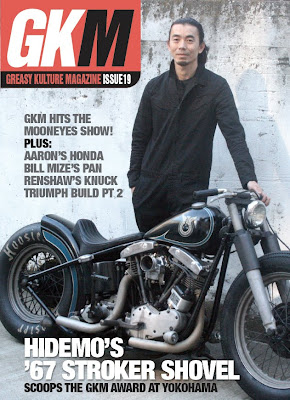 We got to spend quite a lot time hanging out with Guy in Japan, actually it wasn't really hanging out it was more sort of drinking beer and singing 70's UK punk songs. Very good times. Anyway this is issue 19 of GKM along with Hidemo's killer shovel on the cover. Get it H"E"R"E. And think about this, the owners of the publishing houses who put out all those newsstand magazines don't know the difference between a Panhead and a Puch Maxi. They just like collecting the spondoolies at the end of each month. So the thought for the day is "Keep it independent"
Posted by DicE Magazine at 6:24 PM