OMG, OMG, OMG! I am so excited! Its here and I can't even begin to tell you the emotions I am feeling right now! It is probably one of the best things I have ever seen in my life...I'm totally serious.
You get it all with this little number...humour...romance...suspense...YES...'Hotel For Dogs' the Movie is now finally available on Blue Ray & DVD!!!
Oh and the new issue of DicE is out too.... 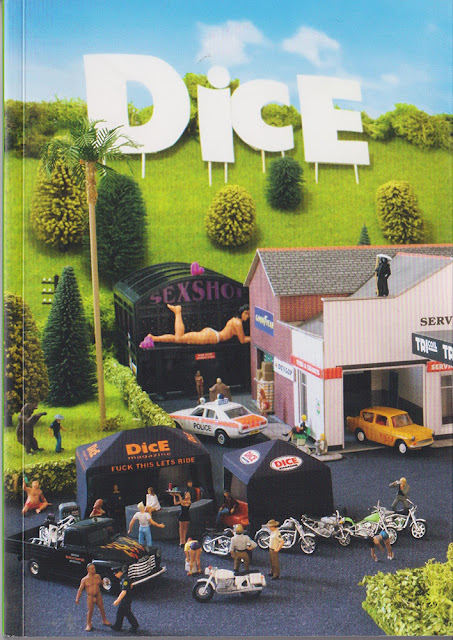 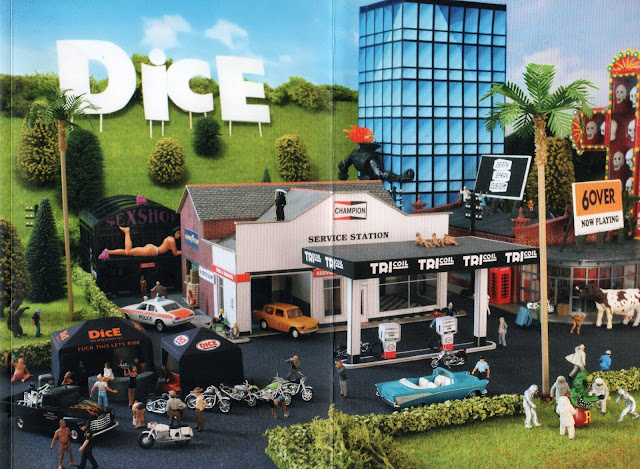 High fives and tongue kisses to David at Death Spray Customs who knocked us out with his fantastic fold out cover!
This is not So.Cal, This is not Egypt, This is not fucking Hackney...
THIS IS DICELAND!!!!! 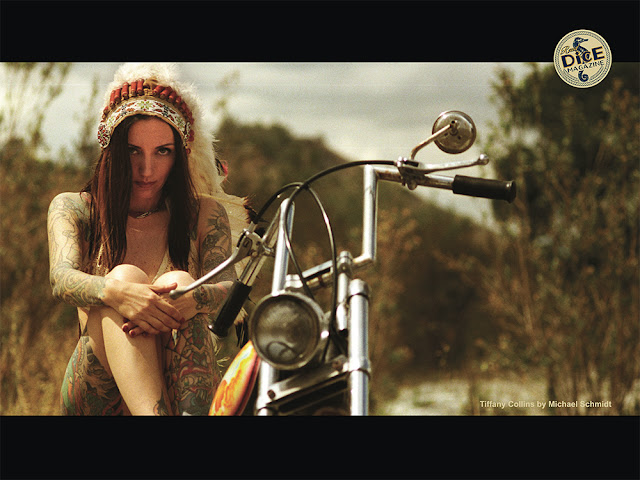 Wait...What...There is also a free 22" x 16" poster with every issue?! Yessireebob!
The lovely Tiffany Collins on her Buell Blast shot by Michael 'Clunge' Schmidt. 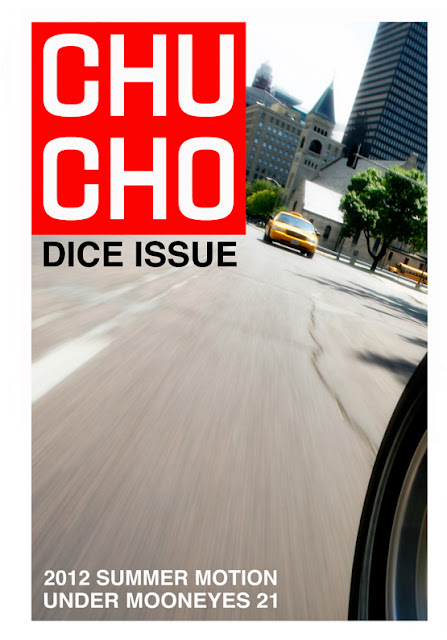 What's the magazine inside a magazine this time I hear you all cry! It's the magnificent 'Church Of Choppers'!! The back issues of 'Chu Cho' go for so much money on eBay that it's not even funny and here we are giving you the new one for free! Yes...we are too nice. 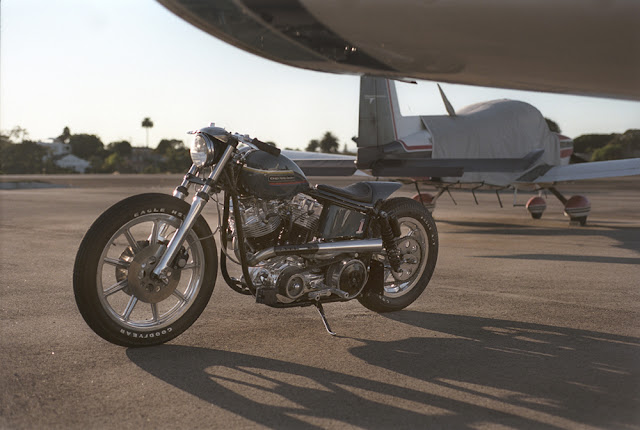 The Cro Customs built 'Yang Yang' shovelhead won the builders choice award at last years Born Free and it is a work of art. If your heart doesn’t beat faster when you see it…you are a dick nose. Oh and Caleb was also responsible for a big punch up at the DicE party in Culver City last weekend.
Pic: Michael Schmidt. 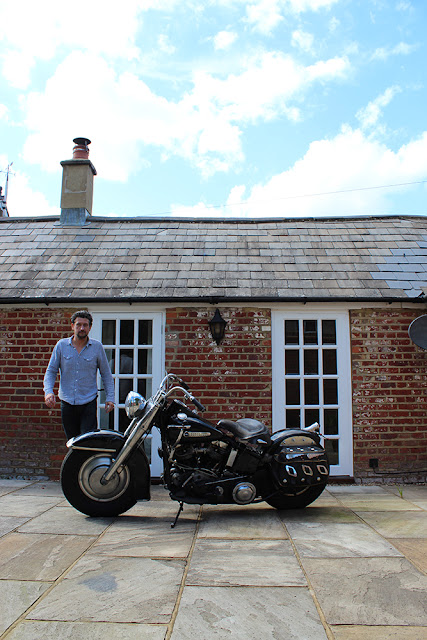 Conrad Leach aka Peacy Leachy aka Con The Don aka Valerie Singleton has this great Panhead called ‘The Knob Gobbling Gobbler’ and when he is not worrying about how much oil it leaks he rides it around the streets of London. 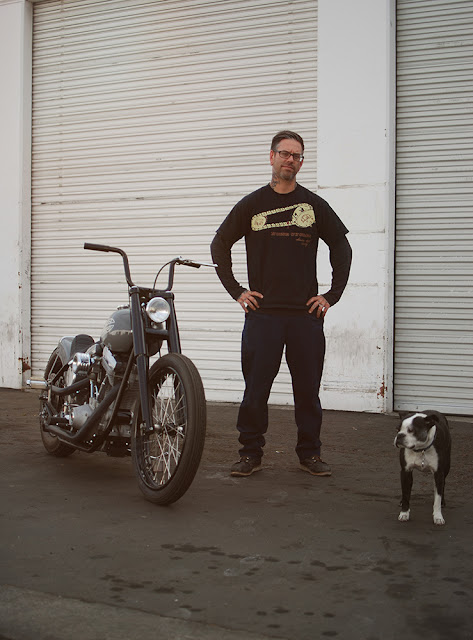 Our good friend T-Bone Jones at Noise Cycles in Santa Ana California decided to quit his day job and build bikes full time at the beginning 2012. To say he absolutely killed it is an understatement!  He built 4 complete machines and did numerous small modifications on other bikes throughout that time. Here is one of those bikes and it's one of the nicest Evo's we have ever seen! Congrats buddy!
Photo: Jose Gallina. 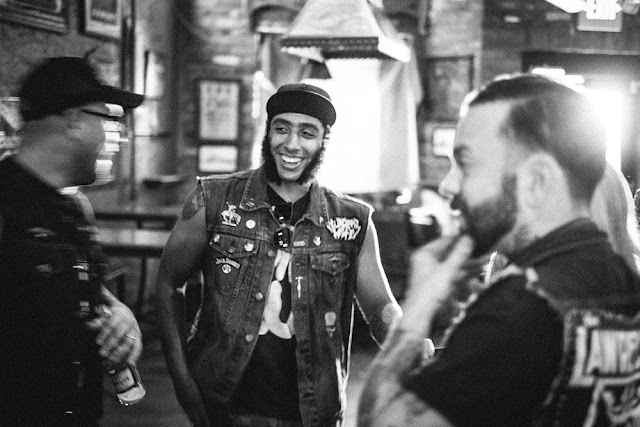 Ok, here is the scenario. You get a lead on an original Vincent Grey Flash that has been sitting for years and it might be for sale really cheap…do you:
A. Do a doo doo right there and then.
B. Break into a Riverdance style leg workout.
C. Give yourself a bum shandy because you can’t get drunk quick enough to celebrate.
Answer: C although it’s always easier to get a friend to help when you go in for an alcohol enema.
The New England Drive-In is a twisted tale of friends, choppers and good times. Yep...They are living the dream! 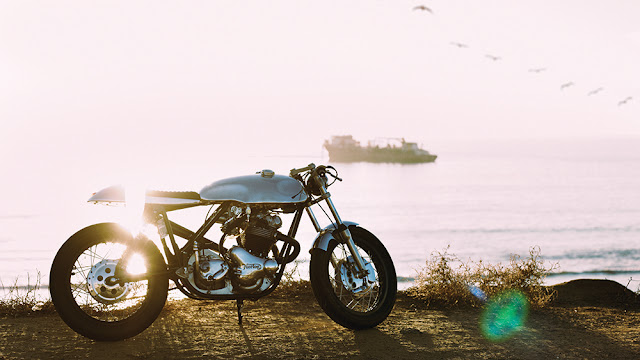 Kim Boyle just smashed you in the face with his new Norton. Boom! It's insane. Nuff said.
Photo: Michael Schmidt. 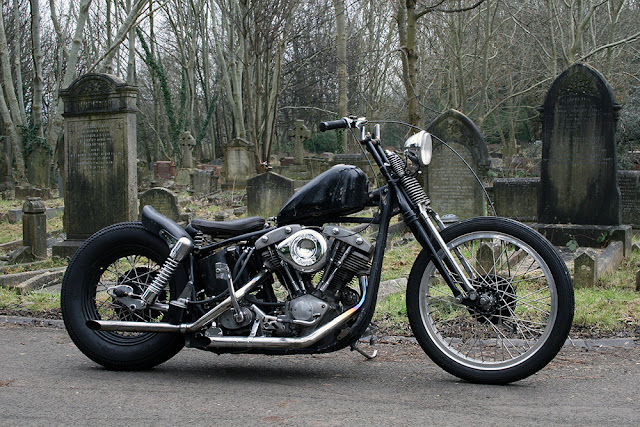 ‘Slippery When Wet’ is the third studio album by Bon Jovi, released on August 18, 1986. It is the band's most commercially successful album, selling over 12 million copies in the United States and has sold over 28 million worldwide. It was named the top selling album of 1987 by Billboard. The album is featured in the book 1001 Albums You Must Hear Before You Die.
Just a fun little fact for you there...so…
Photo: Anna Porter. 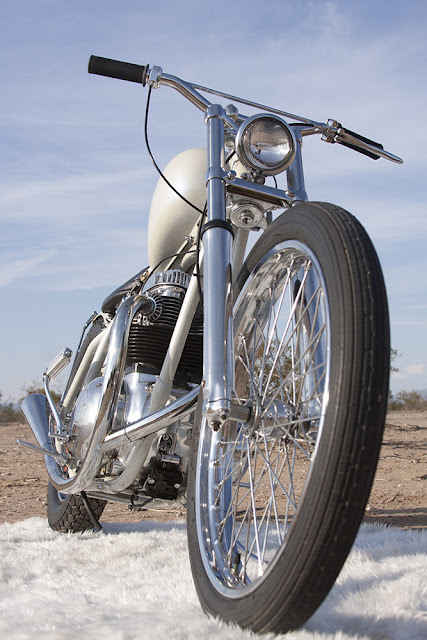 The Haifley Brothers in Arizona just finished this amazing BSA 650 show bike. Obviously they are known for making wicked Bates style seats and P-pads amongst other things...did you see the P-Pad on this bike? It's tiny mate!
Photo: Coalition Imagery. 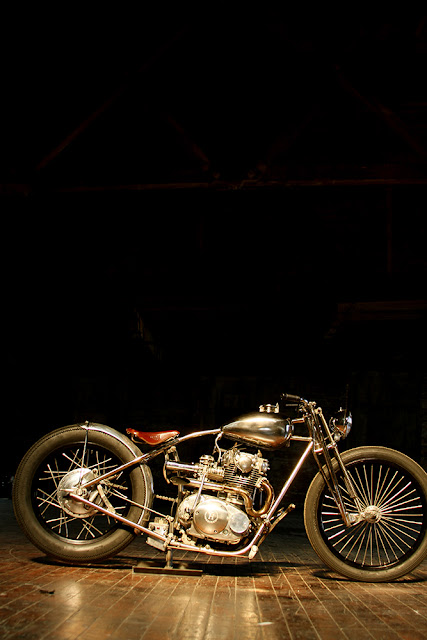 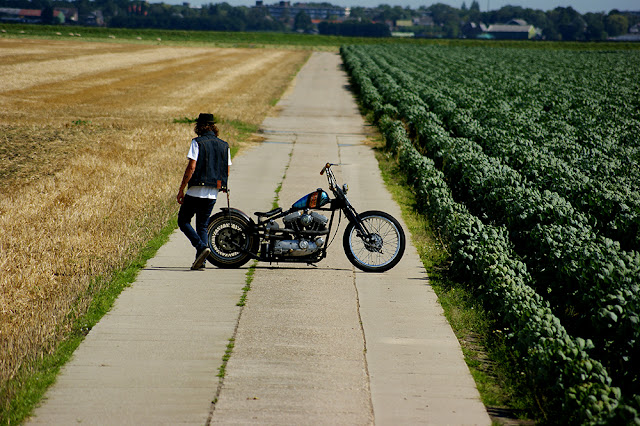 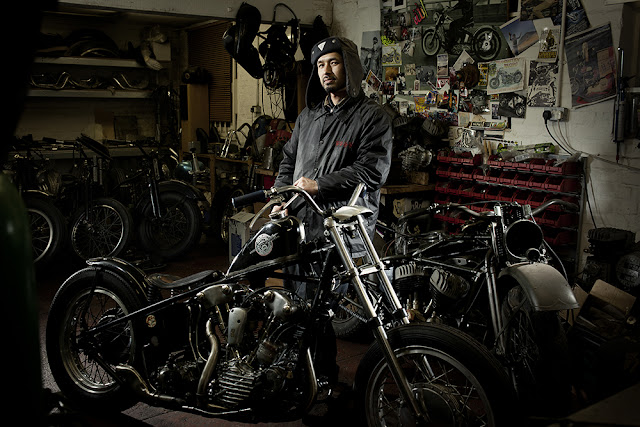 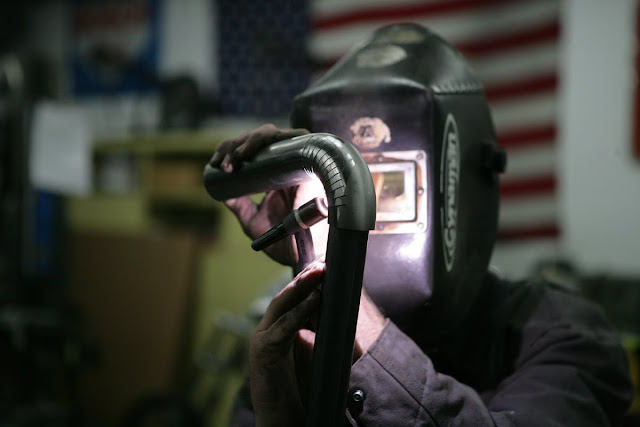 The grand finale in the saga of making the worlds nicest tail light! You can try these step by step instructions to make one yourself but there is not guarantee it will be anywhere as nice as Brandon's one. Mullins Chain Drive, destroying minds since1867. 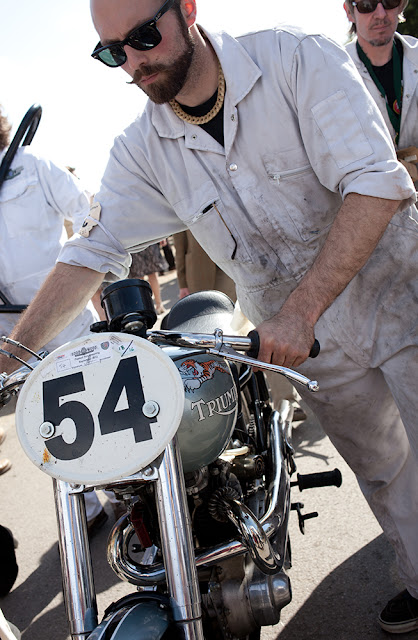 Ok, when things get a little tough and you need to shake things up a bit, why not build a 2 wheeled freedom machine and make for the hills and ride the strange torpedo that is life all the way to the end...OR...you could just stay at home in fear that you will miss your favourite show on A&E every Tuesday night at 9pm. Did you see it last night though?! That was the best one yet! I heart 'The First 48'.
Photo: Gary Margerum. 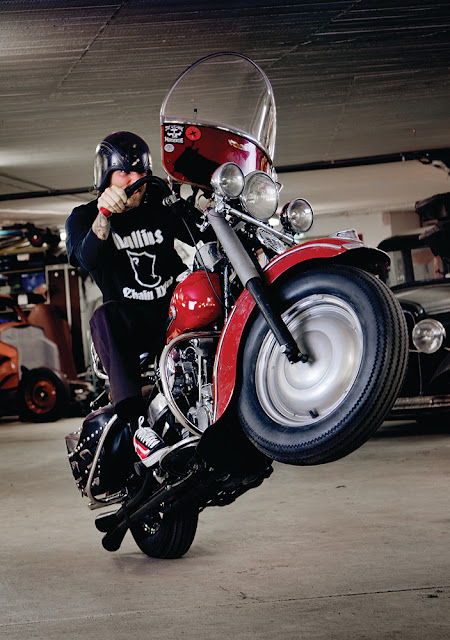 Hands down the best article we have ever published. Nicke Svensson does a wheelie on his Vard equipped big twin Flathead and cracks the frame in half. As 'The Kids' say...'This is Rock n Roll.' 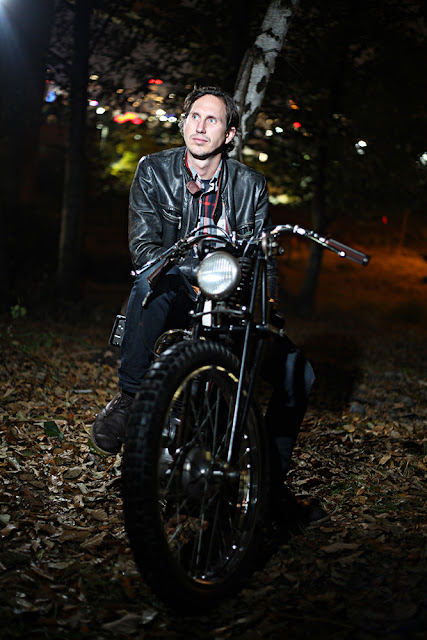 Apparently if you take 3 Panhead engine and machine the lower cases together side by side, fit the barrells at a 45 degree angle, mill the heads so the deck meets the barrells to keep the rockers
level...it will never ever run. 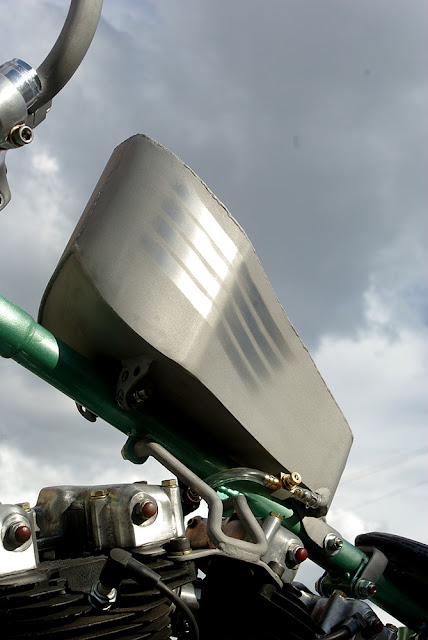 The Busch Brothers are mental! They build really good stuff with a twist. Check out their Ironhead Sportster! As Ronald McDonald says..."Where can you buy shoes when you have size 16 feet?!"


Buy the new issue, or ahem, a subscription right about H E R E
Posted by DicE Magazine at 10:55 AM