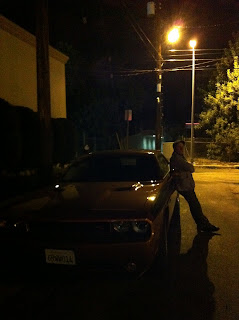 My brother has been in town for a few months making a movie called 7 psychopaths. I read some of the script and saw some dailies. Man this film is going to be fantastic. It's out later this year btw. Now my brother likes all things British but wanted a proper American car while he was here. The production company rented him a Nissan altima 'cos they are cheapskates. "what's this piece of shit!" was his reaction. After some discussion he managed to get them to stump up the extra cash for a hemi RT Challenger. He completely fell in love with it. He has to hand it back today. He is not a happy camper.
Posted by DicE Magazine at 9:54 AM