We have had a lot people ask...

"Is it true that you guys are ending DicE at issue 50 next year??"

I can confirm that we will not be ending DicE at issue 50, but after issue 50 there will be a big change. At this stage we are not going to say exactly what that change will be, but get ready for something a little different. Something that will blow your minds.

Get ready for the Second Coming. 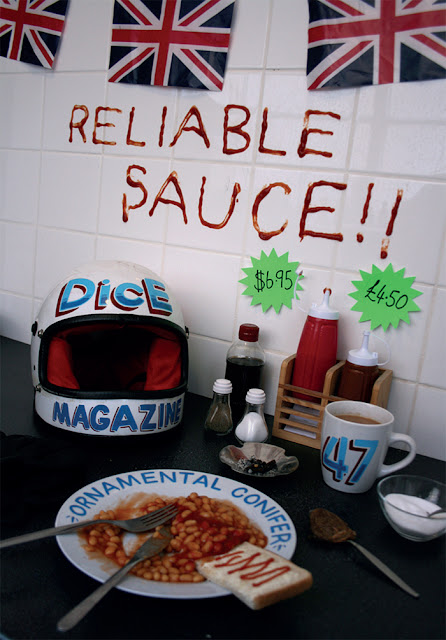 Anyways...before all that we still have 4 issues left of the first testament, including this, the new glorious issue in the shape of number #47!
The one and only 'Ornamental Conifer' blessed us with this stroke of genius of a cover and we thank him dearly. 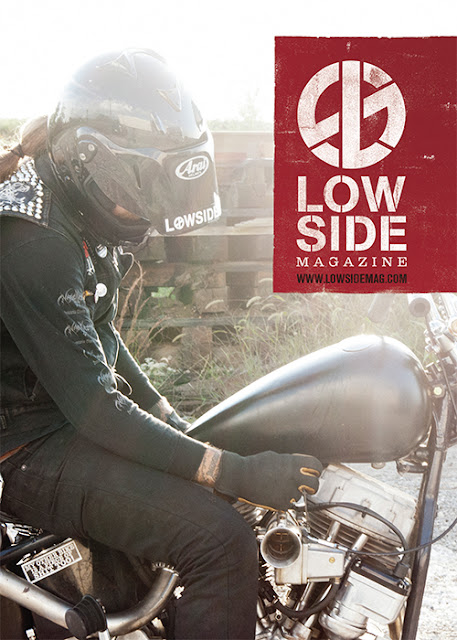 Inside this issue you will also find a magazine in a magazine as always! Praise the wonderful guys at LOW SIDE for handling it and hooking all you lucky readers up big time with double pleasure. 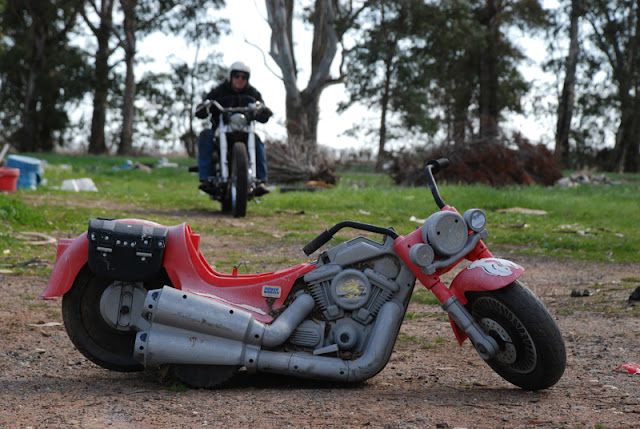 Lee Bender is awesome. The last time I saw him I drunkenly ranted at him for about 45 minutes while he just smiled and agreed the whole time. I, of course, texted him the next day when I woke up with the 'fear' and apologized. He replied "No problem, it was great seeing you!", instead of  "You are a fucking maniac and you have a drinking problem!" and I love him for it. He shot these pics of Casey Smith's 1956 HD Panhead and as always, he nailed it.
Photo: Lee Bender. 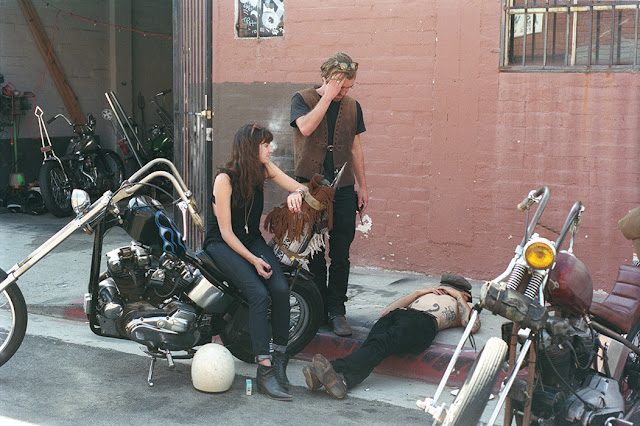 "As much of an honor as it is being in DicE, coming up with words under the circumstances was really difficult. We remember nights the three of us spent in the garage trying to help Ian as much as he would let us with his bike. But like everything, he did it to the fullest and Poods built his bike truly, with blood sweat and tears. He only ate if he didn't need the money for parts, and we will miss the calls for a ride when he would walk 3 miles to the hardware store, shoulder full of shitty parts, trying to find out what he was missing. His bike speaks for itself and he never changed a thing other than his air cleaner since the night he first kicked it over. Poods said, 'What if one day all our bikes are in DicE', and when Michael Schmidt asked about doing a shoot, Ian kept his cool. If you knew em, he was too bad ass to act otherwise. He looked up to so many people and we looked up to him. Where to go from here is rougher than any night we all struggled together, but Ian inspired us with so much love and passion to be real. Bikes are the realest thing we have left of our best friend and he will be right there next to us the rest of the way. A true outlaw...born too late and gone too soon. We love you brother. Chopper Love."
Ralfy and Chenry
Photo: Michael Schmidt. 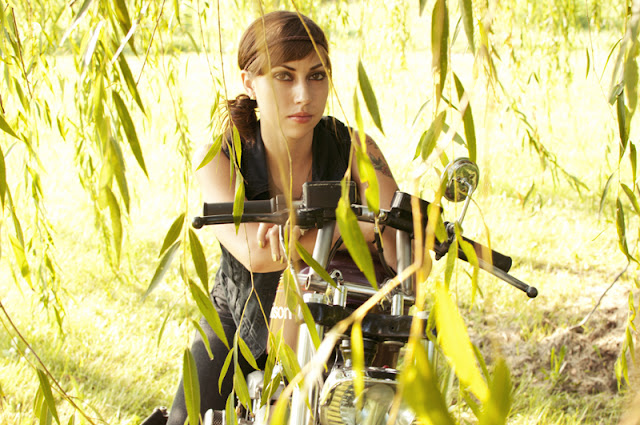 I just got back from Baltimore for the issue 47 release party and Tiny B picked me up from the airport. I was pleasantly surprised to see my good friends Cicero & Katie in the back seat! We immediately drove to a local bar where we drank beers and did what any other biker would be doing on a Friday night in a dive bar...we showed each other who we were each following on Instagram. It consisted mostly of people with small dogs. We then jumped back into the car listened to Britney Spears at full blast before going back to her house so she could show us all her amazing dog, Roxy...or how she says it.."Raaxxy". Biker Style to the extreme. 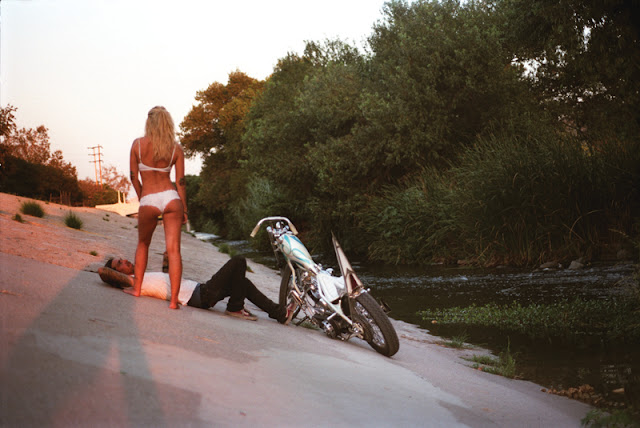 When I was 5 I believed in the tooth fairy. I also believed that the tooth fairy carried around £1 coins to leave under the pillows of gap toothed kids. Thinking back it's complete bullshit because the tooth fairy is tiny right? Just one of those coins would be the size of her whole body! She would have to be a mini 'Ultimate Warrior' to pull off some shit like that! Whatever.
Micheal Barragan & 'California Dreaming'.
Photo: Michael Schmidt. 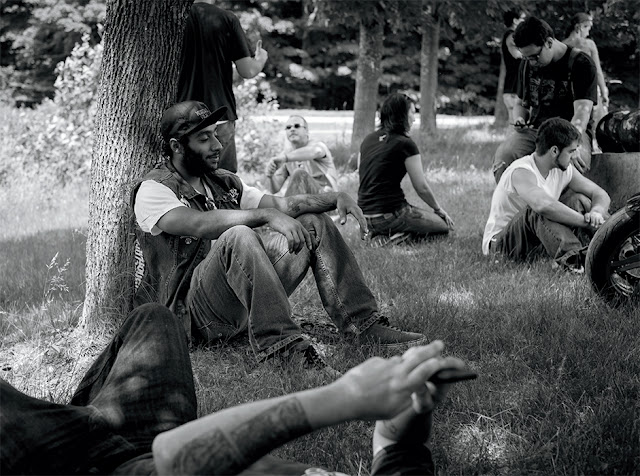 We have 5 pages on the excellent 'Pilgrim Run' with photos by M.J. O'Connell, Stacy O'Connell, Jason Russell & Jason Zucco 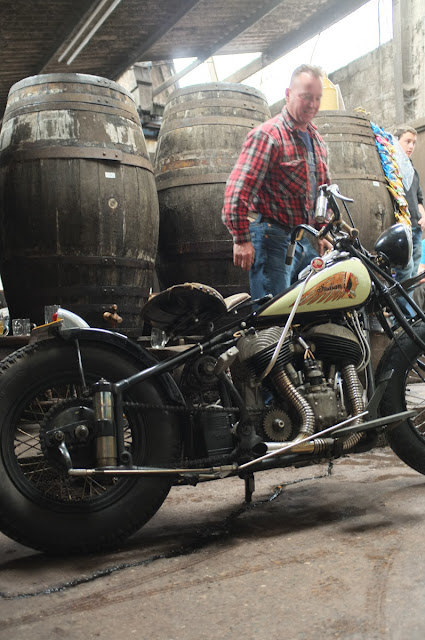 Part 7 in the ongoing saga, trials and tribulations of the notorius 'Black Widows'! This time we travel out west and see how the Bristolians do it. All I am going to say is, 'Cider Farm'.
Photo: Renshaw Hiscox. 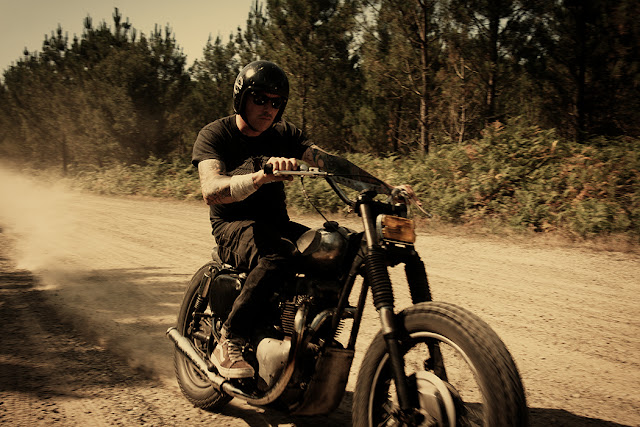 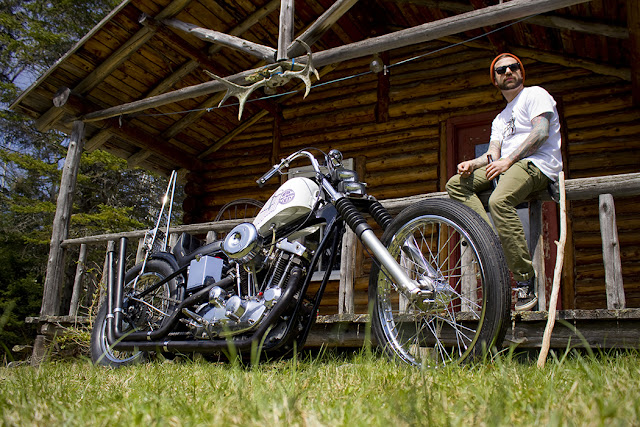 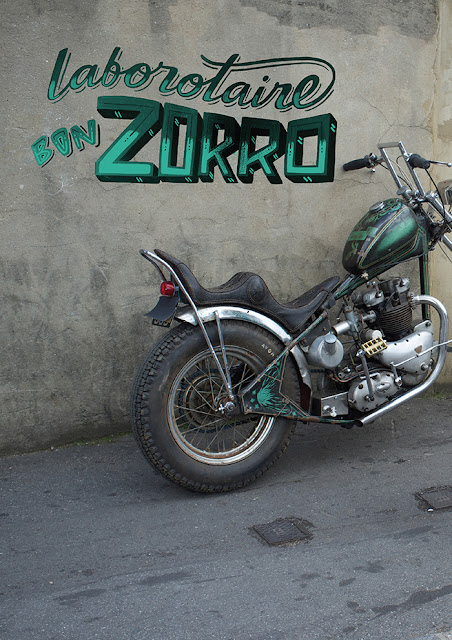 David Death Spray is a lunatic, but in a brilliant way. He put this article together for us on Bonzorro's survivor pre-unit Triumph chopper and it's a classic. Rumor has it that he has also designed the cover for DicE issue 48? Wicked, wicked, jungle is massive!
Photo: DSC. 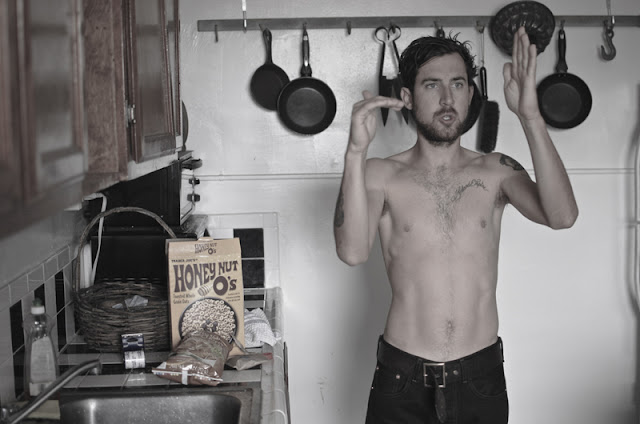 Our new contributor Dan Rivas-Euan actually started with us as an 'intern'. It probably lasted about 3 days. He recently showed me some photos he had taken and they blew us away! We instantly got him on an assignment to shoot Al Boy, who was also our intern at one point. He was worse, he lasted about 2 days.
Photo: Dan Rivas-Euan 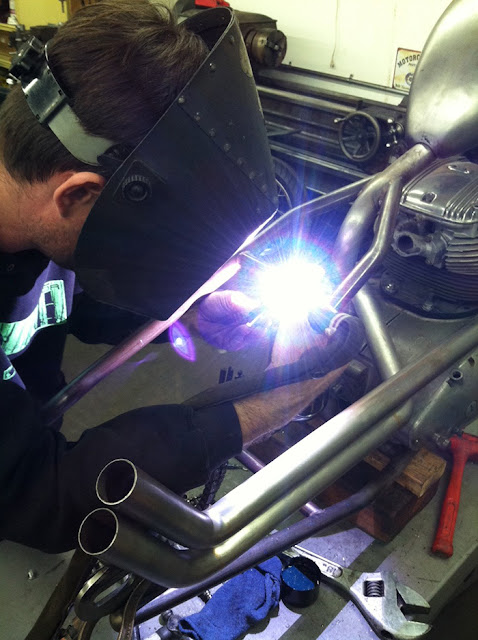 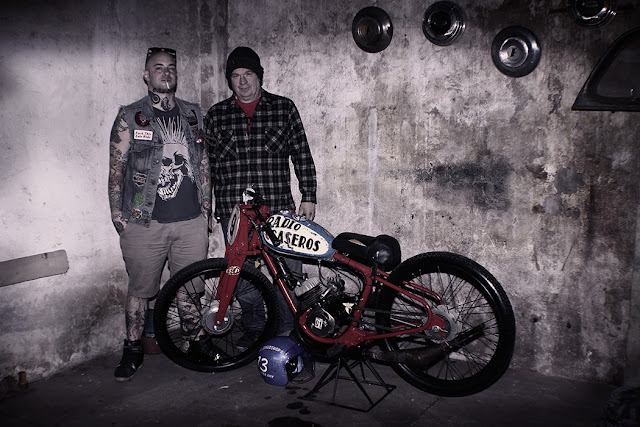 This is a first for us! A Puma Second Series track racer all the way from Argentina!!
Photo: Nelson Lupardo. 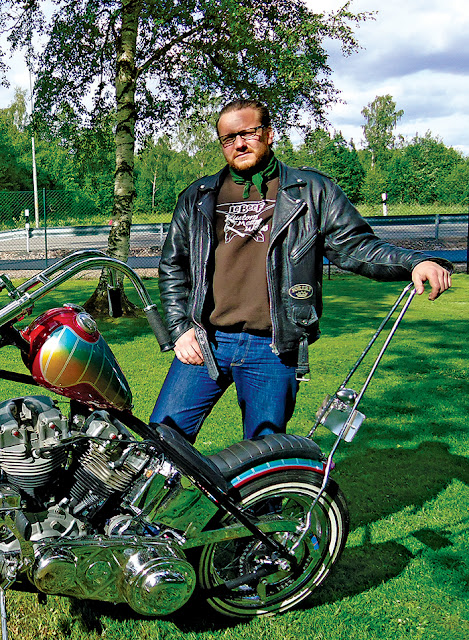 "I truly believe that mushrooms are extraterrestrial probes, since the time spans and other different conditions in this universe or whatever you choose to call it are wide and varied enough for most anything I feel the real task here with extraterrestrial intelligence would be to point it out, to see and feel it - to recognize it. Mushrooms are a spore bearing life-form, and spores are super impervious to very low temperatures and extremely high radiation, and yes - that's the exact kind of environment met with in outer space, the 'magic' you may or may not feel when you eat mushrooms could seriously be your conscience drifting over in the alien-dimension. Mushrooms are our most unique growing vegetable, and mushroom growing is one of the most unusual stories in agriculture, if you're seriously into it I can recommend 'Six Steps To Mushroom Farming'."
Photo: Nicke Svensson. 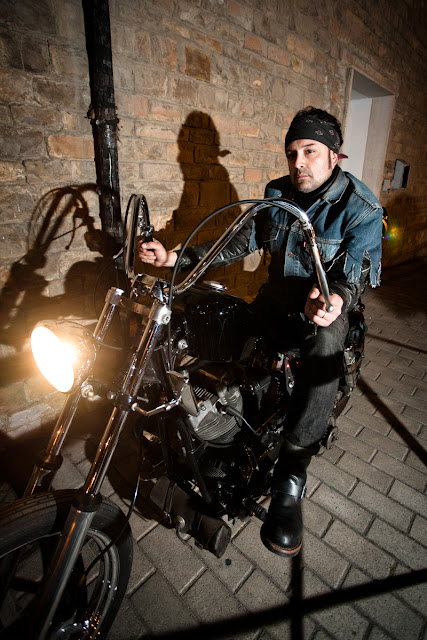 Rotten Fruits is a fantastic bike and it's owned by Cyrus in Italy.
Photo: Massimo Fabbri. 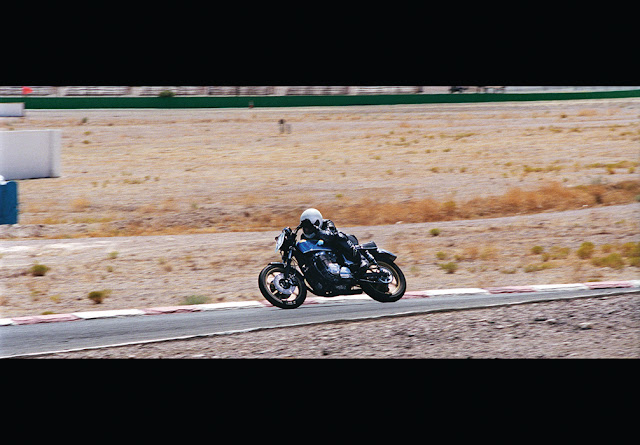 What can we say about the legend that is Kiyo?! If it wasn't for this dude most of the bikes in So.Cal wouldn't be on the road. He should also have taken about 12 of the trophies at Born Free 4 earlier this year because he built most of the bikes there.
Photo: Michael Schmidt.


or come into Tri Co and buy one. The shop is looking brilliant these days.